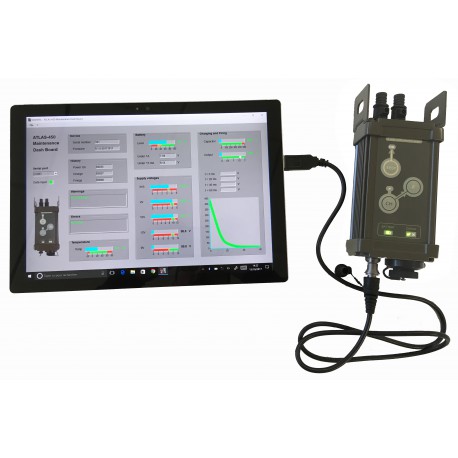 ATLAS-450 is a hard wired electronic exploder, designed for firing of electric detonators. It is a compact, robust and powerful equipment, especially designed for missions of engineering battalions or EOD teams, needing an important security distance.

This exploder controls one firing line and integrate a line-continuity test. It is equipped with versatile sockets, allowing to directly clamp the leads or to connect any type of 4 mm banana plugs.

The rugged aluminium box is waterproof IP 67, Nato green color, and equipped with a polyester control panel, which integrates the buttons and the lights. The leds’ luminosity level can be selected by the user and thus adapted to the work conditions (day / night).

The exploder ATLAS 450 is power supplied by three lithium photo batteries (cheap and widespread). A bicolour led indicates continuously the state of the battery.

Two charging levels are available. The first level is reached quickly and is suitable for most applications. A second step, offering more power, is reached with extended charging, thus allowing to store more energy into the capacitors.

ATLAS 450 exploder features many security levels :
• security key
• automatic discharge of the capacitors when the charge button is released
• permanent measurement of the capacitors voltage
• to fire 2 buttons must be pressed simultaneously
• firing is allowed only when the capacitors are charged enough
• permanent shunt on the firing output
• battery voltage monitoring
• safety sockets and plugs
• monitoring by micro-controller
• self-test of the control panel lights
• redundancy of certain functions

An optional maintenance dashboard software can be used to display the exploder's parameters, to test the main functions and diagnose any anomalies.

A transit case IM2100 can be supplied as an option.